In this blog we demonstrate the use of the GER (Electronic Reporting) Framework to create Bank Positive pay files in the .TXT format.

In the most recent release of Microsoft Dynamics 365 for Finance and Operations, Microsoft has released the Electronic Reporting version of the Bank Positive Pay file. The GER version aligns with the overall product strategy of uptaking the Electronic Reporting framework for all regulatory documents. But further, the timing of its release coincides with the upcoming deprecation of XSLT support in D365F&O, on which many implementations have traditionally relied to transform the Positive Pay files from the standard XML output to the format required by their banks.

The new Standard output from the GER Positive Pay configuration, is again, XML. Many companies will likely do well with this format, assuming that a middle tier solution is implemented, which transforms the XML into the Bank’s format. The alternative to the middleware solution is to create the required format directly in D365 – which is the subject of the current article.

The standard procedure to configure the Positive Pay feature is documented well in the following article, and we will assume familiarity with the general Positive Pay feature, and some degree of understanding of the GER Framework. https://docs.microsoft.com/en-us/dynamics365/finance/accounts-payable/set-up-positive-pay-er

Following the documentation in the above link, import the latest Positive Pay format from the Microsoft’s Global Configuration Repository. The related/parent artifacts – Model and the Model Mapping are detected and imported automatically.

Start off the customization by creating a new Configuration Provider for your company and set it to ‘Active’. This will enable you to create custom GER components in your own Provider repository. 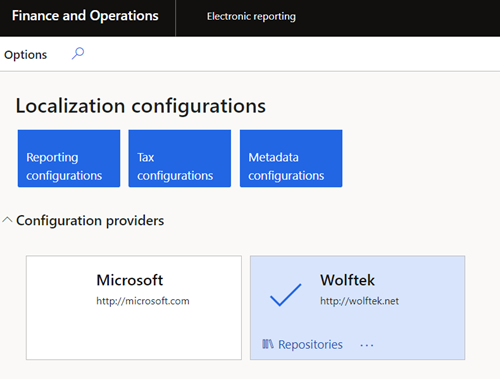 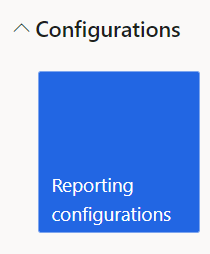 Now, on to the exciting part. In order to provide for the Text version of the export, we need to create a custom ER Format. This format will be based on the standard Positive Pay ER Data Model, that is shipped by MSFT.

Note the settings in the ‘Create…’ dialog: 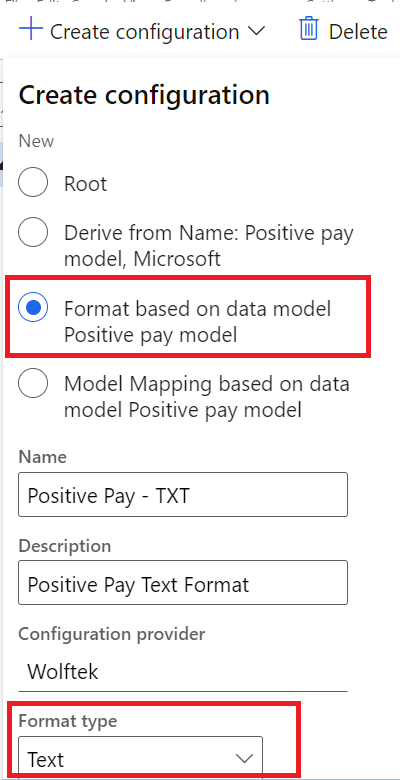 You’ll note the newly created Format, which is Based on the standard/latest version of the MSFT’s ER Model. This ‘base’ mechanism allows for a later Re-Basing of the format, should you choose to take advantage of the newly added model elements by MSFT in the future releases.

The next step is to design the Format by adding the Text elements to its contents. Because this is a completely new Format, we’re starting with a Blank design canvas: 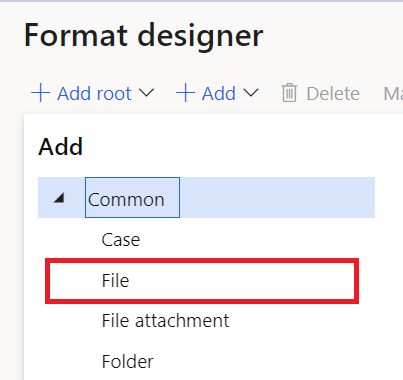 Set the desired encoding, and ‘Suppress BOM characters’ if needed. Some legacy Bank software cannot properly process text files with BOM, so it may be wise to remove them. You have many flexible options to use here as well, such as defining a custom file extension, setting Cultural and Format settings…We’re keeping it simple and accepting all defaults. 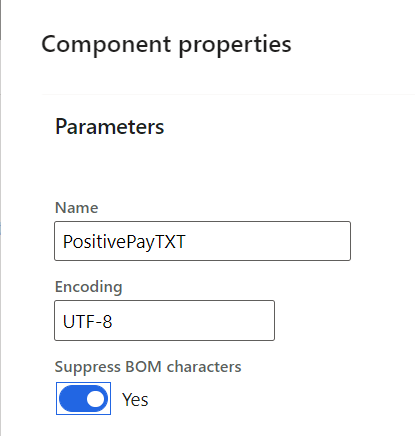 Next add a ‘Sequence’ element – this represents a Collection of records, which will be repeated in the file 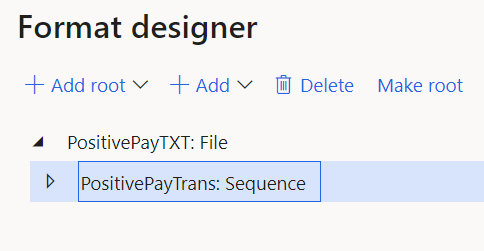 Continue to design the Format with the required elements in the Positive Pay file, as required by the Bank. Map the format elements to the Model.

For an example, we’re providing a simple format with just a couple of fields, separated by ‘space’ and a CRLF character at the end of the Sequence, which will force each check to start on its own line in the text file. 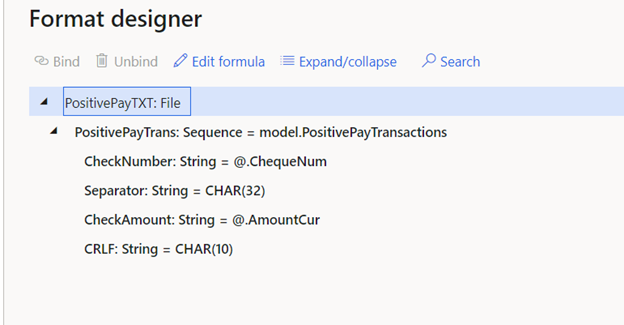 Save the format and ‘Complete’ the ER version. This enables the new ER Format to be selected in the Positive Pay Formats configuration. 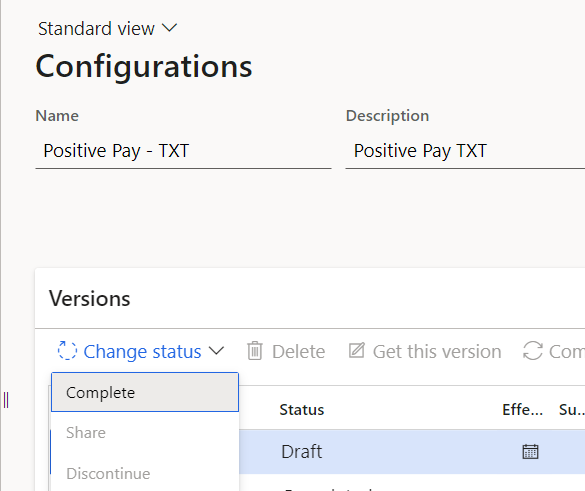 Configure and Use the ER Format

Assign the format to the bank account and execute the Positive Pay file run. The result is a Text file:

There are many different ways to connect Power Apps to D365 F&O. We’ll discuss the following three common approaches in this post:

We threw together a simple App to demonstrate these options: 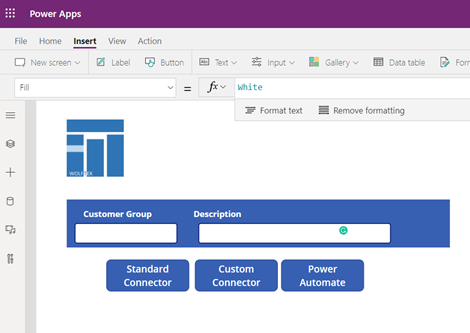 The use case here is simple. If you’re able to leverage the Standard F&O Connector, go for it! For simple update scenarios the connector does the job fairly well. Use the standard Patch function to insert or update the data.

Here is a simple example of creating or updating Customer Groups with a standard connector: 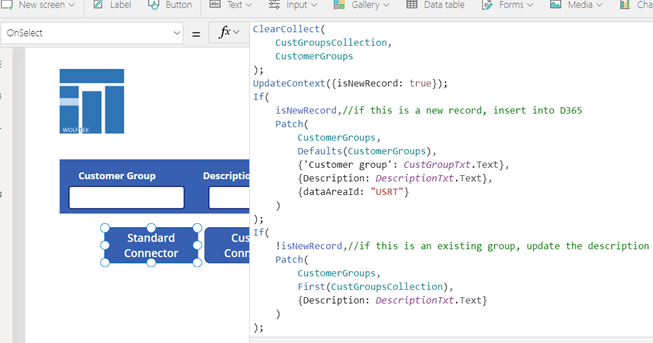 The tool of choice for anything more complex and custom. This feature gives you the full flexibility that comes with custom services in D365.

Really briefly, we threw together a custom RESTful service in D365 and wrapped it in a Custom Connector: 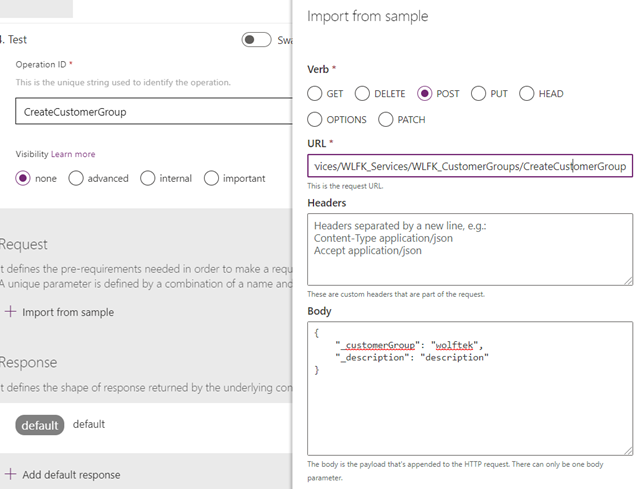 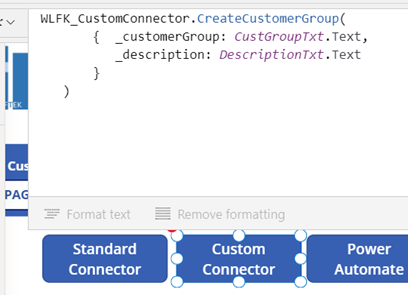 The very nice fallback to the above methods is Power Automate. The use case here are scenarios that call for iteration of collections, multiple staggered actions, etc. 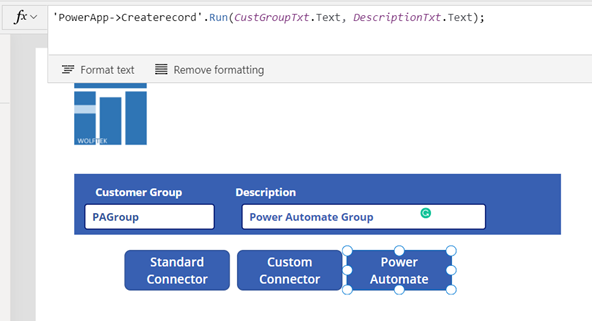